Serve your guests this rustic and earthy Wild Mushroom and Sausage Stuffing for the holidays. This dressing is full of deep flavors from pork sausage, mushrooms, and fresh herbs and finished with melted cheese on top. Easy to make ahead of time!

Out of all the side dishes you’re bound to enjoy this holiday season, I urge you to indulge in this Wild Mushroom and Sausage Stuffing. Its deep flavors from sausage, mushrooms, herbs, and sourdough bread are so satisfying and filling. A versatile recipe, make it any way you like or follow my recommended variations.

The flavor combinations are unlike any other, thanks to the mix of pork sausage, shitake, cremini, and oyster mushrooms. Finished with melted Gruyere cheese on top, this stuffing is completely irresistible. It’s sure to make all of your holiday guests happy!

Prepare this stuffing a day ahead of time or freeze it for later. Full of flavor and uncomplicated ingredients, it’s one of the best Thanksgiving recipes around.

This rustic stuffing is the ultimate addition to your Thanksgiving meal. The wild mushrooms give it an earthy flavor while the juices from the pork sausage soak into the sourdough bread. It’s a unique recipe you can play with or make as-is.

Here’s what you need:

What kind of bread should you use?

Any kind of dense hearty white bread is best for stuffing because of its firm texture. This kind of bread will still soak up flavor while retaining its shape as it bakes in the oven. I used sourdough, but a French or rustic loaf would also work well. Head to your local bakery and pick up a fresh loaf, then let it sit uncovered overnight so it hardens.

Looking for a gluten-free option? Go ahead and use a gluten-free loaf that will hold its shape as it bakes with the broth and other liquids.

Do you need to use eggs in stuffing?

Eggs act as a binder when used in stuffing. You don’t have to use them, but they do help to hold everything together. When you use eggs, the stuffing will feel a little more filling and be similar to a custard.

To make vegan stuffing, replace the eggs with 3 flax eggs instead. One flax egg = 1 tablespoon of ground flaxseed + 3 tablespoons of water. Let this mixture sit for 10 minutes, then mix in with your stuffing.

How to make Easy Mushroom and Sausage Stuffing

The best mushroom and sausage stuffing isn’t hard to make. As a bonus, it can be made ahead of time!

Can I make this stuffing ahead of time?

Stuffing gets even more flavorful when it’s made ahead of time. Assemble it completely, and then transfer it to your baking dish. Top is with a few knobs of butter, then cover it with buttered aluminum foil. Refrigerate overnight and bake the next day.

Toasting the bread cubes isn’t necessary if you’ve let them sit out ahead of time. Leave the bread on the kitchen counter for a few days so it can dry out. Afterward, keep it in an airtight container at room temperature.

Can I stuff this into turkey?

I wouldn’t recommend it. One of the best parts of this stuffing is the gooey melted cheese on top! That can be tricky when it’s stuffed inside of the turkey.

You need to make sure the stuffing cooks to a temperature of 165ºF when it’s inside of a turkey. This makes it safe to eat, but can sometimes mean your turkey is overcooked. Best to cook the two separately.

Make sure the leftover cooked stuffing has had a chance to cool down to room temperature before storing it away. Keep the leftovers in the fridge for up to 4 days. Make sure it’s sealed in a shallow container.

You can also freeze stuffing for up to 1 month once it’s cool. Keep it in a freezer-safe sealed container or bag. Reheat it right from frozen in the oven or microwave.

Fill your plate with this stuffing and more savory side dishes for the holidays:

How did you like my Wild Mushroom and Sausage Stuffing? Let me know what you think! Leave a comment or rate this recipe below. Don’t forget to take a picture and tag me on Instagram! I love to share all of your recreations! 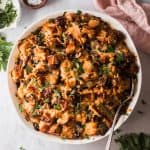 Make ahead: The bread can be dried out in the oven a few days before and stored in an airtight container at room temperature, or just left out on the baking sheets overnight to dry at room temperature instead. The stuffing can also be completely assembled, topped with butter, covered tightly with buttered aluminum foil, and refrigerated overnight. When ready to bake, let the baking dish sit out on the counter as the oven heats. Bake for the same amount of time. Storage: Leftovers can be refrigerated in an airtight container for up to 4 days or frozen for up to 1 month.
DID YOU MAKE THIS RECIPE?Be sure to post + tag @lenaskitchenblog on Instagram & use #lenaskitchenblog!
Nutrition Facts
Wild Mushroom and Sausage Stuffing
Amount Per Serving
Calories 463 Calories from Fat 252
% Daily Value*
Fat 28g43%
Saturated Fat 13g81%
Cholesterol 127mg42%
Sodium 1182mg51%
Potassium 449mg13%
Carbohydrates 34g11%
Fiber 3g13%
Sugar 4g4%
Protein 20g40%
Vitamin A 1068IU21%
Vitamin C 5mg6%
Calcium 185mg19%
Iron 3mg17%
* Percent Daily Values are based on a 2000 calorie diet.
6
Previous Post: « Easy Garlic French Green Beans (Haricots Verts)
Next Post: Shaved Brussels Sprouts Salad »